Sometimes something in your life has such a huge impact on you that you are moved to feel strongly and want to take action. For me that was coming in contact with the Western Australian Autism Association Early Intervention Program. This program changed our lives, it taught us so much about Alec and how to help him.

I would do anything for them!

Over the last 4 years we have run events to raise much needed funds for them, we have done 2 terrifically successful crop days made so by my amazing friends, I remember standing in my kitchen watching 5 women making baby quiche and pastries for the crop day and feeling such amazing gratitude that they would do this for me and some very generous scrappers, we have done coffee for a cause and now our friend Kamran and Louise from Fiori coffee have stepped up and held three events with all proceeds going to the Early Intervention Centre.

Last year Kamran was given an amount of Kopi Luwak coffee beans. Kamran offered them as a fundraising idea and over the last two weekends that gesture came to fruition in the form of coffee tastings at Entendre in Shafto Lane on march 21st and 2 sessions at the Fiori roastery on Saturday the 28th. On Saturday we packed up the boys and helped out, it is amazing how many glasses you go through for a coffee tasting, Michael said it was 180 glasses per session I think.

Alec and Riley set up amongst the beans and played safari or took turns on the computer, They very reluctantly came home with me at 2pm and Michael stayed and helped out for the afternoon session.

Kamran and Louise, thank you so much for everything you put into these events, we can never thank you enough.

Written at 6:40 am by Alli.
3 comments
Monday, March 23, 2009
coffee, sailing and a little boy with a big heart
Wow what a big weekend. We had two fundraisers, one that Michael had organised with Kamran and Louise from Fiori coffee for the Autism Assoc and then on Sunday we went to the Royal Freshwater Bay Yatch Club for Doc on the Swan which is an event to raise money also for the WA Autism Association. 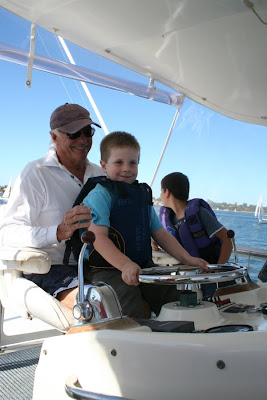 As you can see Riley went out on one of the spectator boats and absolutely loved. Unfortunately Alec wouldn't go on the boat. He had made his mind up days ago so I bought along provisions and the DS. Alec and I went for walks among the boats and he picked out a few that I am sure have a million dollar plus price tags that he said he would like.. I did ask what he wanted a boat for if he wouldn't get on. 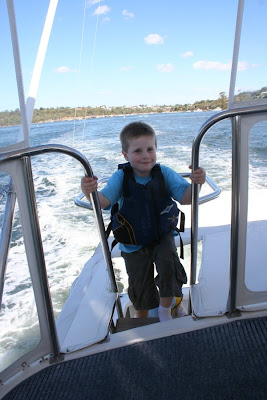 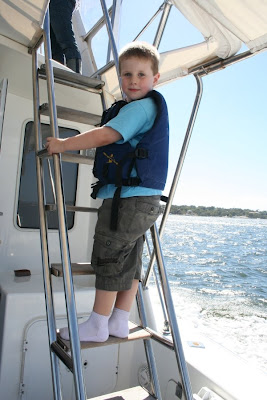 They did have gorgeous grounds too and 3 different guns, Alec wanted to take them home I am sure, he loved climbing all over them, he also loved walking along the walls, which gave me major heart attacks as we were perched on a cliff and it was a straight fall down on the other side. 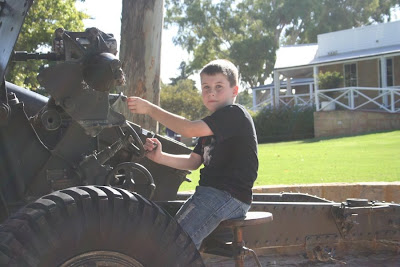 Alec did get on the boat when they came back, he froze on the stairs and yelled, I can't move I am scared of heights, Michael said look you are half way down you are fine, he said oh, I am too and climbed down, which is more than I could have done, I am terrible, especially with ladders! Michael said Riley was up and down the stairs every five minutes. 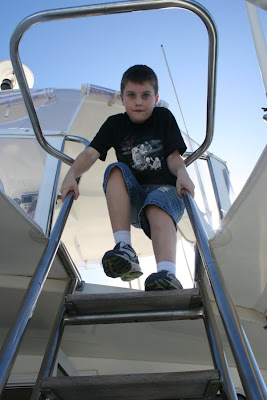 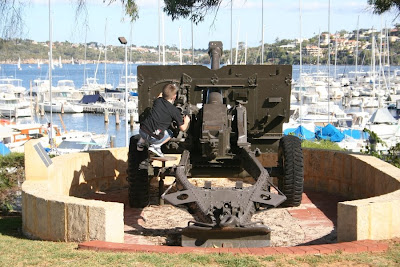 It was a long day and even though they put on a BBQ it is an hour drive home for us so we left at 6pm and picked up Hungry jacks for the boys on the way home, they loved that.

The day didn't end well though, at bed time Alec became very upset, he experienced regret, regret for not going on the boat, he was crying and almost inconsolable. Poor Riley kept comming out to tell me things so I went and had a little talk to him, I said, are you worried about Alec? he said he was, I told him I was worried about him too and I was sad that he was sad and what a good brother he was to be so concerned about him. I figure that while I can't explain the reason why Alec is different from him right now I can start talking to him about his feelings and what he can do when things worry him or when he worries about Alec.

A few months ago Riley came to me and told me that he would look after Alec forever. This little man has amazing insight and such a huge reseviour of compassion. It is not a roll I would ever push him into but from now we must give him guidance and attention and just talk to him. He can be such a serious little thing with such a huge heart.
Written at 10:34 am by Alli.
3 comments
Monday, March 16, 2009
look at me look at me!!!! 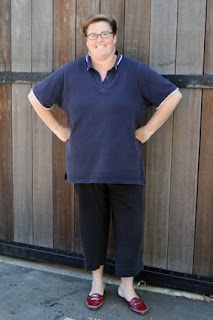 I never thought I would yell those words from the roof tops but here I am!

As of today's weigh in I am 107.5kg (236lbs) and I have lost a total of 22.5kg (49.5lbs). Last week I got the results from my diabetes test and it was in the normal range, I still have to watch it because after exercise my blood sugar levels can take a bit of a dive and get too low. Speaking of exercise, can you believe it I have a sports related injury!!!! I am in a fair bit of pain, I think I have a groin injury from running up and down stairs, if it hasn't improved by Wednesday I might have to drag myself back to the doctor, limping is no fun and I really am missing walking.

See those clothes I'm wearing, well that is the last pair of pants that fit that I have and one of two shirts and a set of work out clothes, I am so reluctant to buy new clothes but I will have to eventually, I am looking a bit shabby.

A big thanks to Sharon for taking this photo for me and for Lis for emailing them to me :) . We were at Taylor's Studio in the Swan Valley for Lis' 40th birthday breakfast and I asked Shraon to take a picture. I did really well at brekky, I had bacon and eggs and I just ate the yolks and the soft bits of bacon, it was yummy and really nice being out and it was so nice seeing Lissy so happy.

On the creative front I have a couple of the photo projects I am working on almost ready to go, I just need 12 matching photo mats, you wouldn't believe how many different shades of white there are, I might get them to do me a cutom lot and I need a few frames for some things I want to put up and then I think it is time to print out some more photos and do some scrapbooking!
Written at 11:47 am by Alli.
8 comments
Wednesday, March 11, 2009
The 365's
Here are some more of my 365 day layouts for my book. I have totally gone with the Ali Edwards digital brushed from designerdigitals.com . I like the idea of continuity and my handwriting is never going to look that good. I have also chosen the same font for all the journaling, 3 mm century gothic. 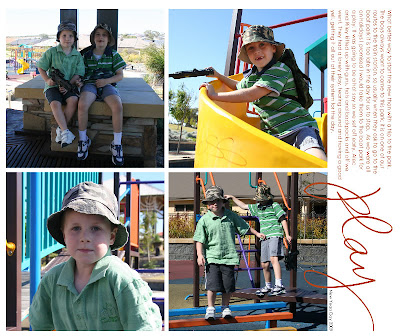 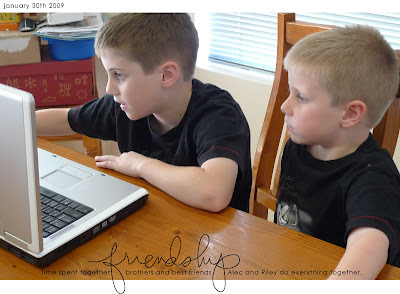 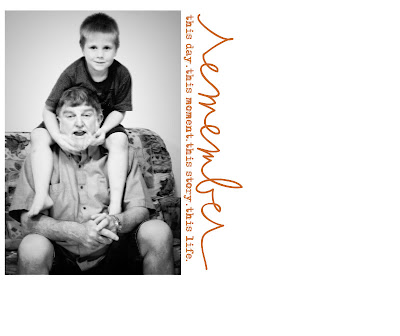 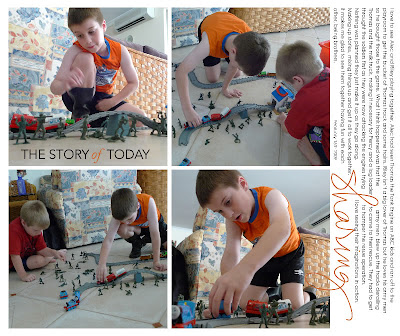 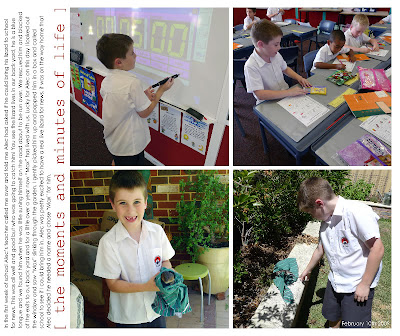 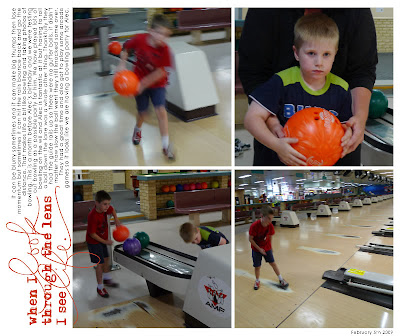 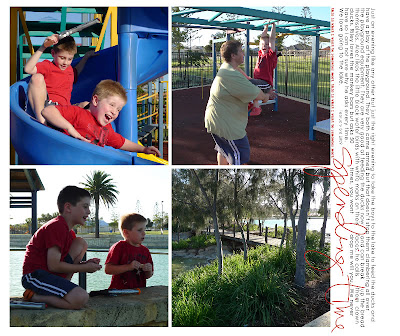 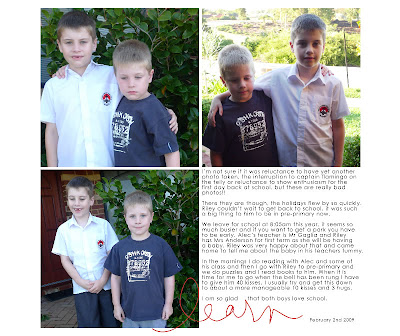 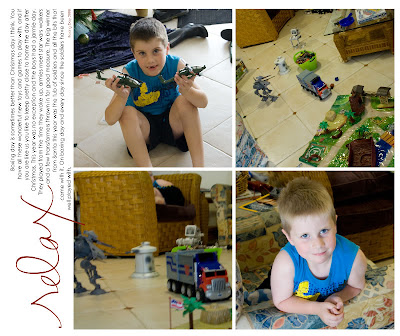 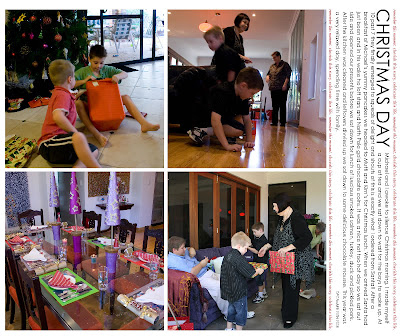 Written at 8:25 pm by Alli.
2 comments
Sunday, March 08, 2009
memory dump
So you thought I had up and left didn't you. I can understand that it has been two weeks since I shared any amazingly exciting tid bits. It has been a mixture of being busy and doing just the everyday. We have had a birthday though, on the 25th of February my baby turned 7!!! Due to the bowling centre moving we booked his party for the weekend of march 7th, so glad we did. It was fantastic though, Alec bought along 4 of his little friends from school and they had a ball. 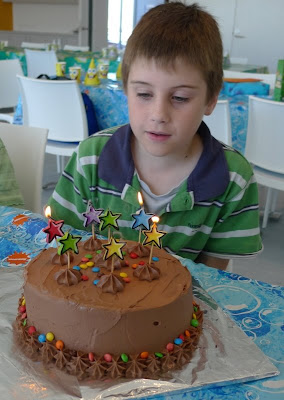 This is when Alec's friend Jack bowled a strike, there was much hugging yelling and squealing, they were so cute. 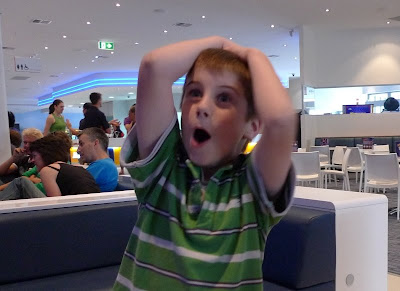 Look at that a brand new bowling centre 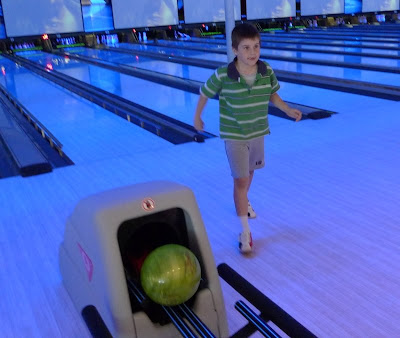 After bowling, food and cake we took the boys to the arcade,some of the games you won tokens you could redeem for prizes, well Michael was pretty good at this and we ended up with 100's of them. Alec spotted a bow and arrow set for 290 tickets and Riley spotted some green army men, we said no to the army men as we have 100 already and said he could have a bow and arrow set too. Then home time came and I had to get the boys back to be picked up, I left Michael behind with Riley as he needed another 50 tickets, Alec was a bit concerned but I assured him daddy would be coming home with his bow and arrow. 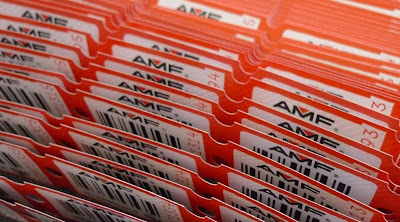 We all recovered nicely and Sunday was a day of rest. It was so nice to just spend the time together watching tv, playing games and doing computer. Alec loves the protability of the OLPC, this will be the computer he uses for school. 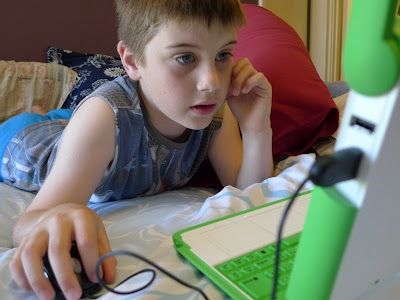 So yes I am still here, just haven't had much of an ability to put anything into words lately. I've started working out which of my 53 projects I want to work on left, oh make that 51 as I got two done on the weekend, sroted all my paper and made some stuff.. lurve making stuff I do.

On the weight loss front I have now lost 22kg (48.4lbs!!!) I am keeping track of everything with calorieking.com.au, I'm not sure I would be doing as well otherwise. Saw the doctor today and my HBA1C level is down from 7.9 5 months ago to a wonderful 6.3 (under 7 is controlled) and my bp was 115 over 65. I have no regrets I tell you, I have a goal and each week it is getting a little bit closer.