Tuesday, October 31, 2006
It's beginning to look a bit like Christmas!
I know I am going to regret these snowflakes when I start cutting them out but they looked so cute! 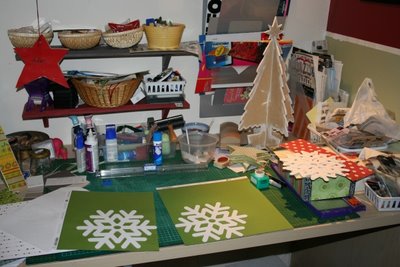 Written at 7:34 am by Alli.
2 comments
Sunday, October 29, 2006
Cutting stuff up
I envy girls that can cut stuff up and make it look spectacular.. Look at these two -

pretty cool pages, I've tried it but it isn't me and I can live with that their pages look alive, I like that.

Well I've started on Christmas decorations this week. We had some gorgeous paper mache stuff in at work, stars, bags (oh I so wanted the bag, not as a bag but just to decorate it) chests and pencil holders, well I got 3 stars and they will fit across a door way and a pencil holder to decorate for Michaels office at work, I also had a Christmas tree sitting in the cuboard and I pulled that out and the boys and I will paint the edges this afternoon then I will cover it. It is one of those Kaiser ones I picked it up from bunnings, thinking of using it as the Christmas day centre piece for the table.. So pictures later today

Written at 12:25 pm by Alli.
5 comments
Friday, October 27, 2006
Scrapbooking Memories vol 8 no 4
This is my last commisioned piece as a master it seems, it is for everlasting keepsakes, it was a bit of a jumble of product, what I finished up with looks more like something for Basic Grey, anyway it is my most favourite layout I have done for the magazine so far. 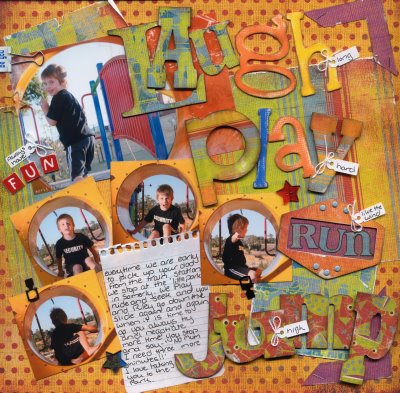 I also did this, it was lost in transit for 17 days, the commisioning letter didn't turn up until 2 days after its due date and I hadn't started it when I got the paper work.. oops, it still isn't back from the magazine so here is a rather bad photo of it. I haven't seen the magazine yet but I hope it looks better than this! 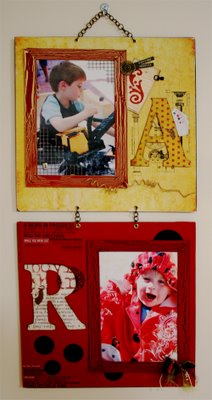 Written at 2:22 pm by Alli.
3 comments
Thursday, October 26, 2006
Tool boxes
I needed a tool box for kiwi scraps so I made this one.. then Ali Edwards liked it so I gave it to her and then carried my tools around in a plastic bag, not alot of forethought on my part there, I hope my box is having a nice time. 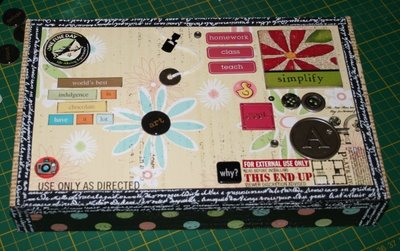 So the story starts 6 months ago when we were in the city and walked past a tobacconist and they had a sign saying cigar boxes $1, we walked out with a dozen, I had been missing my tool box and was looking for something to take the drills to class in on Saturday so I did myself another one. 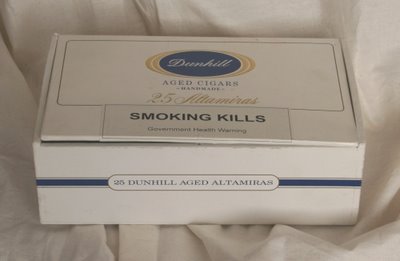 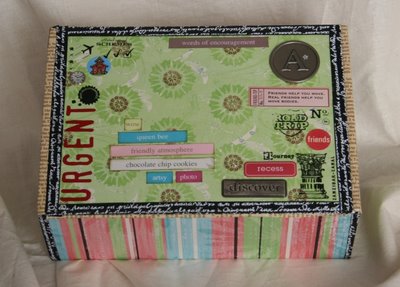 Epiphany 2
Epiphany 3
Written at 11:02 am by Alli.
0 comments
Friday, October 20, 2006
The 40 album
This was fun, I didn't really have a plan I just winged it, I'm happy with it. That silly bunch forgot to take pictures of themselves waiting so I mainly just have photos of myself but I did get some great group shots with the girls. 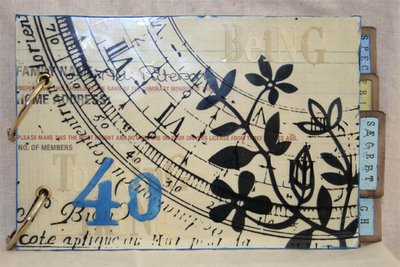 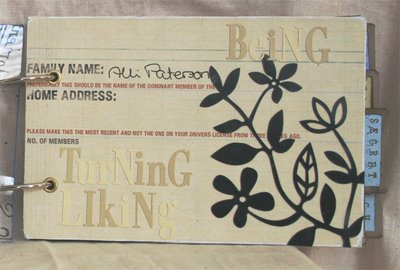 Written at 10:47 am by Alli.
2 comments
Wednesday, October 18, 2006
Warm Fuzzies and ouches
Yesterday on the way to therapy I had the radio on, Depeche Mode came on with Just Can't get Enough and I turned it up, I don't know if it was the memory of when it came out, the music itself or all of it but suddenly I felt happy, almost joyful, then from the back seat I hear a little voice, so I turn it down, Alec says...'mum I like that music it makes me feel happy, can you turn it up' we both had smiles and we both bopped along to the music and mum sang, off key and out loud, it was a good feeling and a nice shared moment.

So I have this lump on my head, it has been there for years but it is always itchy and goes up and down so finally I asked the dr to remove it. Well I didn't take into account it would hurt and that I wouldn't be able to wash my hair for three days. Seriously though I am glad it is gone, it looked like a cherry pip, he felt the need to show me LOL I also had some bobbly bits taken off each side of my neck, I'm a bit stiff and have 6 stitches in total, Michael can take the stitches out in a week, Alec will love watching that, I have such ghoulish children.

I want to scratch my head! my hair feel yucky already!
Written at 7:35 am by Alli.
0 comments
Tuesday, October 17, 2006
Speech assessment
at the beginning of last term all the children at kindy had speech assessments and the results came back yesterday, they are getting me a copy but Alec had almost the best results in the class. He had the best speechie, Chris was amazing I credit her with a good percentage of his progress this last year.

I find it hard still, even though we don't have those awful full day meltdowns it is still hard, probably because then I didn't know it wasn't just a phase. I know I should be happy but I am just sad right now, it is probably seeing all his little class mates running around with no obstacles in their way and here is my baby struggling to understand. I hope as he gets older it will be easier, already I can see so many different things with Riley's development compared to Alec at the same age, this is when Riley isn't copying Alec, some days it is like having two autistic children!
Written at 9:04 am by Alli.
1 comments
Monday, October 16, 2006
thoughts
Kindy went back today, all the kids were excited, Alec included, he couldn't wait to say hello to everyone, he just doesn't know the right way to go about it. He was trying to talk over them, get in the group, be a part of it but it just didn't work out that way. I saw hurt and confusion cross his face fleetingly and I felt pain, pain because I never wanted to see my baby as an outsider.

As I walked away I wondered how it would be as he got older, would he understand better the rules of our society. This is when I feel defeated because I lack those tools I need to make it right for him, I know we can only go forward from here, I just wish some days it didn't feel like such a difficult path we will have to travel.
Written at 10:50 am by Alli.
0 comments
Sunday, October 08, 2006
Donna Downey - Trash to Treasure: toilet paper tubes
Donna Downey has her new newsletter out, The Creative Playground each month she is posting a challenge and this month it was toilet rolls. She was right I spent a few days coming up with ideas of what to do with the humble roll, as it would happen instead of having 28 of them laying around I had 3! So instead of the butterflied covered extravaganza I was planning I did slices, I love it though it is little and cute, it measures 14cm square and I am going to use it as an inspiration folder.

For some reason Michael was quiet emphatic about never slicing toilet rolls on the scroll saw again. I'm standing watching saying you can get another slice out of that one and I got 'the look' 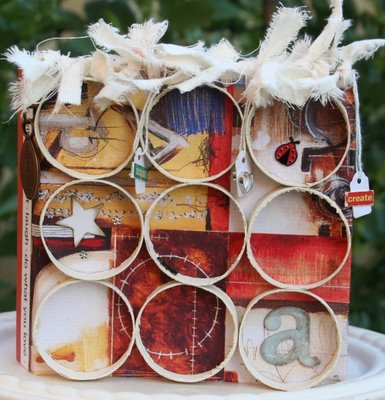 Written at 7:56 am by Alli.
7 comments
Saturday, October 07, 2006
Ali's seven different prints challenge
This was done right after I had the book, Lissy did the sewing for me. 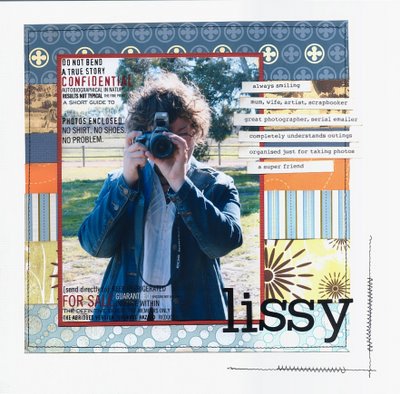 Less prints same principal.
It makes for a great background, I haven't tried one using the prints as the entire background yet. I am down to very few scraps so I am going to have to start cutting up more paper. 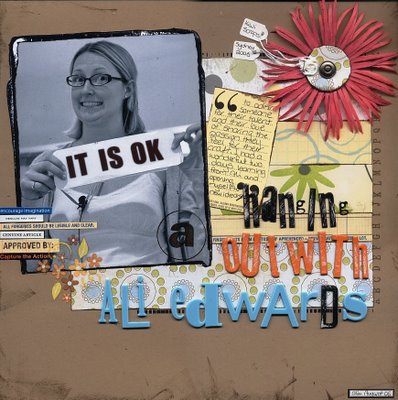 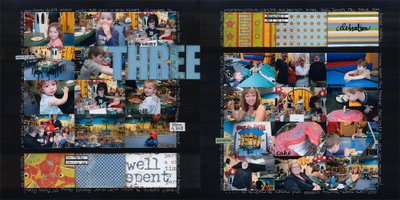 This was great! 24 wallet sized photos some PP scraps and Riley's birthday pages are done in the same week as his birthday.

Written at 9:59 pm by Alli.
2 comments
Wednesday, October 04, 2006
Ali Edwards Journaling challenge
This is theAEzine challenge : week two (Ali's is stunning) I'm liking these, not what I had envisaged when I started out with this one but it did fit the criteria set out by Ali for the challenge. I found it difficult to be brief (for me) but this was the format I chose as I wanted all of us on the one page. 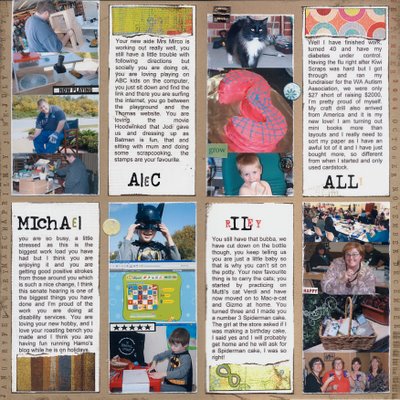 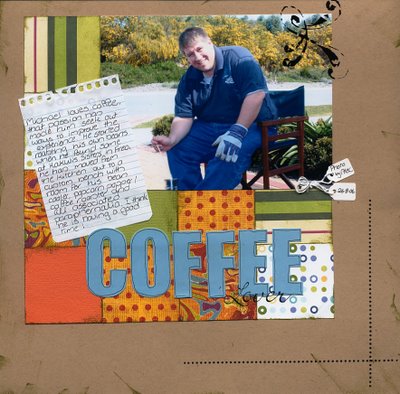 I seem to concentrate on Alec and Riley and forget about me and Michael, I only have 5 BOM pages so I really need to pick up there, maybe I will do a BOM for Michael too. 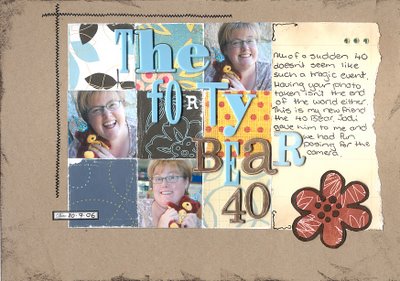 Written at 3:59 pm by Alli.
4 comments
Sunday, October 01, 2006
Happy Birthday Riley!!
wow my baby turns 3 tomorrow, we had the party today at Go Bananas, the party started at 9:30 and at 8:37 Riley was screaming that we had to go, we live 12 minutes from Go bananas. We eventually gave in and just went, Alec told Riley we were going to Go bananas and Riley burst into tears and told us no we were going to his party. 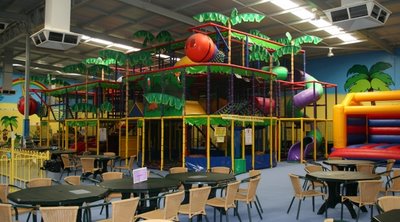 It was a lovely small affair, 7 kids who all had great fun, Alec caught up with his friend Sean from playgroup and they had a ball, infact Alec was amazing, he was into everything and the look of exhiliration on his face was fantastic, autism took a holiday today after a rather bad week, he was the most coherant, expressive and focused that I have seen him in ages. he was brilliant. Michael got him playing air hockey with Sean, which he loves and this one was so much nicer than the poor old battered one we play with at the PCYC. 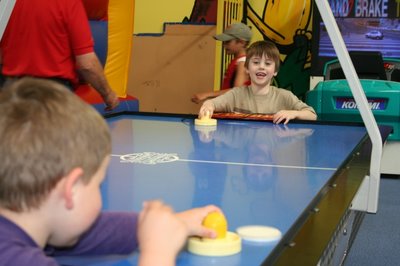 At 11:10 Riley decided he had had enough so Michael sat in the car with him while I packed up, when we got home he had a temp, he slept in the car so now Alec is sound asleep and Riley and I are playing with his toys. 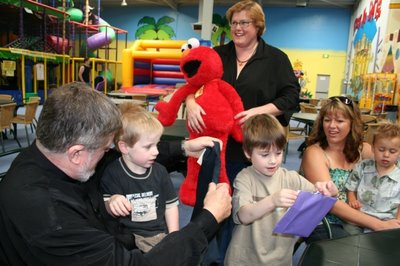 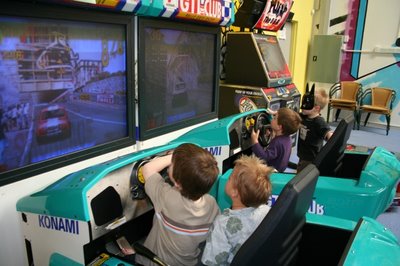