Sunday, July 30, 2006
Just layouts!
my gorgeous friend Lissy took most of these photos while she watched Alec and Riley for me during the school holidays while I worked in the mornings, there are still dozens more photos the kids had a ball and then last Sunday we went to Lissy's place in Caversham and had a photo shoot there. here are SIX I whipped up, it might have helped that yesterday I got a copy of Elise Flannigan's and Ali Edwards new books!! 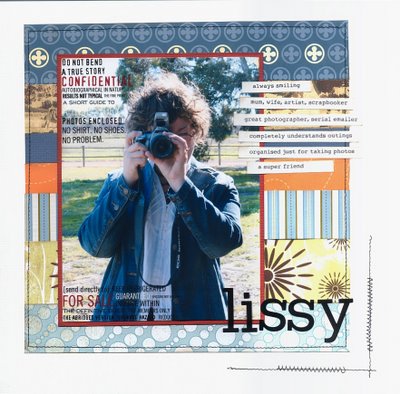 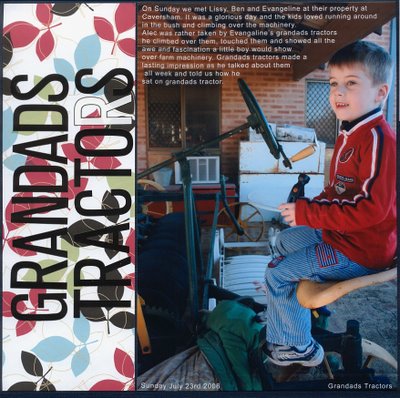 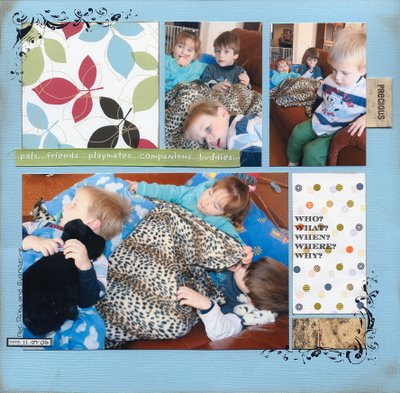 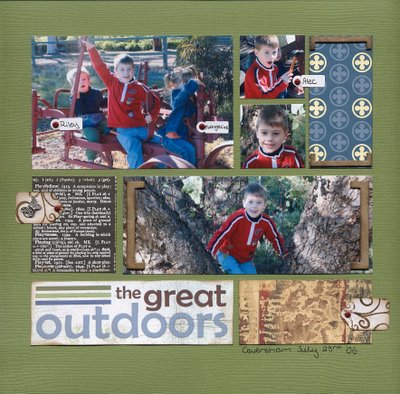 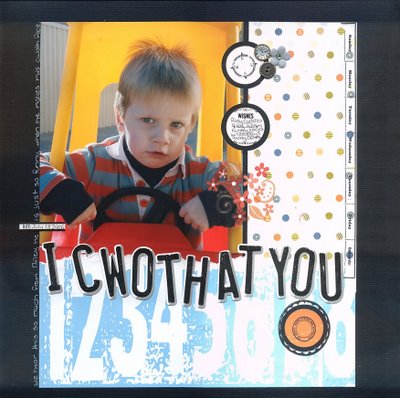 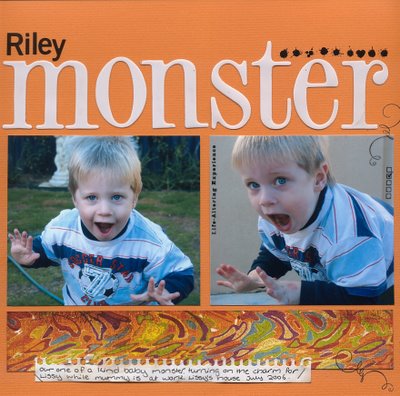 Written at 3:01 pm by Alli.
2 comments
Saturday, July 29, 2006
The Masters
Well my reign as a Master is almost over, Scrapbooking memories have made the calls to the 100 and my friend Lissy got a call!!! WAY TO GO Lissy!!! I am so excited for you
Written at 8:42 am by Alli.
0 comments
Friday, July 21, 2006
crop day update
As you have probably seen I am putting together a crop day to raise funds for the WA autism association early intervention centre, Well due to conflicting events I have decided to move it to Saturday the 9th of September, we also have a new venue that will hold up to 100 and wont cost us anything, which is just fantastic, so check out the Helping Hand blog I set up for the crop day for updates, by Monday I should have a definate on the venue then you can start booking spots!!

have a good one and take care on the roads if you are in Perth! it's crazy out there today
Written at 7:22 am by Alli.
1 comments
Thursday, July 20, 2006
Quel tragedie
Bugger... We have had to move our autism crop day fundraiser a week forward! It isn't that much of a tragedy actually because now we look like we can get a hall free of charge, thank you to my gorgeous friend Danelle!!

On an even more tragic note I visited the dentist yesterday for a clean, well I have 1/2 a clean and have to go back next Tuesday for the other 1/2 they were so bad :( she also scared me and told me I had bone loss!! I like my teeth where they are so I am thinking I better make this a more regular thing, 2, 4 and 8 year intervals aren't that advisable any more.

Also it was nice to hear from you all!!! See I knew I wasn't talking to myself.. Even my cheeky hubby dropped by!

Have a good one I am off to teach a class (have pity on me there are 17 7,8 and 9 year olds) no actually it is good fun, I have just learn't to avoid things you need to use glue on LOL
Written at 7:43 am by Alli.
0 comments
Tuesday, July 18, 2006
I can see you!
come on leave me a comment I'm lonely and it is starting to feel weird talking to myself all the time. 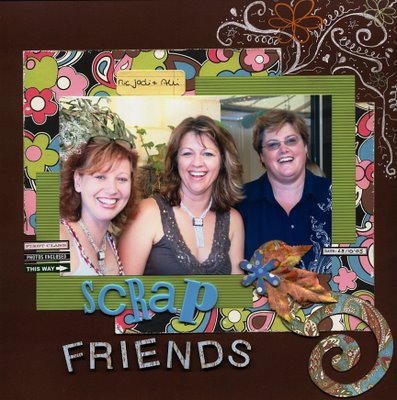 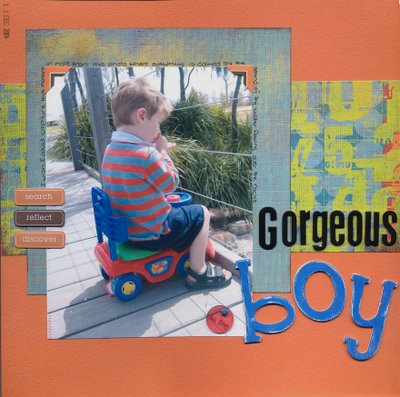 Written at 7:32 am by Alli.
7 comments
Saturday, July 15, 2006
38 sleeps to go!!!!
Until Kiwi Scraps!! I'm a tiny bit excited and a little panicked as I haven't done much of my homework and can see myself sitting on the plane doing my journaling!

We have had a busy week here, between work and parent information days we have only had one day of holidays so far, next week wont be any better as I have classes Tuesday and Thursday and work Wednesday a make up centre session for Alec Monday and a Christmas in July party Friday afternoon! Next holidays I am definitely spending the whole time in my jarmies!

Great news as far as the Autism Crop Day Fundraiser is concerned, it looks like the council will waive 90% of the room fee, we plan to have this as our only overhead for the whole event. We now have the cover letter and letters of request ready to send out to Scrapbook stores and wholesalers requesting donations and product for raffles so fingers crossed we get a great response. On the day we will have 63 places available and 9 tables of 7 so if you want to book a table email me

And a big thank you to Casey Wilson and Claire Stewart from Express Publications, they have put a notice about the crop day on the Scrapbooking Memories web site for us!

have a great weekend!
Written at 8:55 am by Alli.
0 comments
Monday, July 10, 2006
School Holidays!
Started at 4:12am today :( it was raining and I woke to Riley screaming RAIN MUMMY RAIN, Alec camped on our bedroom floor and Riley wriggled in between us and didn't stop wriggling until 5:20am when I escorted them back to bed. I dozed until 7:30 when we all got up for good, I seemed to be making toast and sweeping up all morning then I decided to clean the kitchen and fold some washing, this is a huge accomplishment BTW, these tasks have long been overlooked/ignored.

We had to duck out to pick up some supplies for my class tomorrow and both boys were so good, we all held hands all the way around the shopping centre. Home to more food preparation and sweeping and a nice hour spent reading a book while my two tired munchkins had a sleep.

After class tomorrow we are having a play day at Lissy's with Evangeline, they are minding the boys while I do my class, and Saturday I had such a wonderful time scrapping with Lis and Jodi, it has been so long since I relaxed like that and didn't have appointments or meetings to rush off to, we must do it again soon Lis!

I've finished 5 layouts but haven't quiet gathered the energy or desire to scan them yet... Maybe later then I will share..
Written at 4:11 pm by Alli.
1 comments
Thursday, July 06, 2006
It's all happening!
Well yesterday I spoke to Claire Stewart at SM, Claire is the gorgeous girl that does the marketing and events for the magazine and I worked with her at the Perth Quilt and Craft fair, I had remembered they have announcements in the magazine so I called her to see if I could get information about my Autism crop day fundraiser in, alas I was a few days late but Casey and Claire are going to get it up on the Scrapbooking memories web site for me!!

I have now created a blog just for the fundraiser here - A Helping Hand with all the information and details, I am booking the room today, yes I know I should have done that first but I had to get the information out last night or I would have missed out and I want this to be a great day for everyone and I want to raise as much money for the Autism Association as I can!

So go and have a look and if you would like to come along or help out in some way email me at autismcrop@gmail.com or leave a comment.
Written at 7:40 am by Alli.
3 comments
Monday, July 03, 2006
oops
On Friday I checked the mail and there was a commissioning letter for an off the page item for SM... oops, forgot about agreeing to do that didn't you!

I would love to show you but alas all I can offer is this tiny slice of my weekends work!

Which all worked out ok in the end because I was able to send it off with my Blue Cardigan challenge page, only now one is a week late and one will be a week early. That is Lissy's journaling as I had to get a photo from her to go with the flowers :) 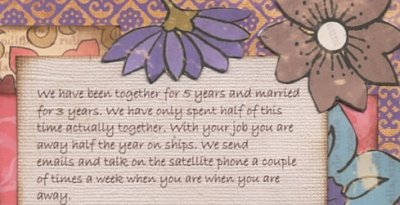 Written at 4:49 pm by Alli.
0 comments
Saturday, July 01, 2006
Home again Home again
Except it sounds like homagin homagin when Riley says it when we pull into the garage.

We went on an adventure to the city today, on the train! First stop was shoes for Michael for work, and while he tried on shoes my two funny little boys took down shoes and tried them on too, Alec even tried to tie the shoe laces, he had this little conversation with Riley.. "Look Riley do you like these ones? They are berry nice" they even put them back when they had finished trying them on, then they saw a mirror ball and went off and danced with the mannequins. Then we had the whiney bit until we went to see some toys and Alec was very happy, I got him a matchbox fire engine scene, he loves those little things and is very happy with his weewooooo (fire engine) and Riley now has scrambler from Bob the Builder. Mum had bought Riley some sleep suits, he hates sleep suits so we exchanged then for another outfit and the toys.

We only had one heart stopping moment, Alec had been wonderful holding my hand all the time, then we dropped into a second hand book store and he was in the store right beside then all of a sudden he saw a pigeon and he was off, another lady on the street saw him too and dived for him, the bird ofcourse was perching on the the very edge of the pavement, we caught him in time. I tried not to freak out too much, then on the way back to the train I let him chase them, I just had to run along too as I wasn't about to let go of his hand.

Now I really must go, I found a commissioning letter from Scrapbooking Memories in the mail Friday and the OTP item was due umm Friday, guess what I haven't started yet! (guess what I have no idea as to what to do!)
Written at 2:52 pm by Alli.
0 comments